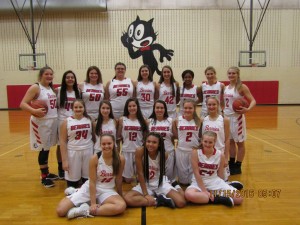 Sarah if a foreign exchange student from Saxony, Germany. She is the sweetest girl you will ever meet. This year she decided to play soccer, basketball, and possibly softball. I met Sarah during soccer season this year. She is an awesome soccer player. She has played soccer for 10 years. It has always been a passion for her to play soccer. It all started out in kindergarten, when she won her first award playing for her team. In Germany, they don’t have school sports teams. They have to be on a club team. She has played for three different teams so far. She had played with several of the best players in her area and the best in the state. She also used to play volleyball back in Germany with some people from her church. She loves to play sports and isn’t afraid of trying new sports. This will be her fist year ever playing basketball. She is always a hard worker during basketball and I can see her improving every day. She always pushes herself when we run, during drills, and during the games. She always has good sportsmanship. Sarah is the best little I could ask for.

Best memory here: When she made her first three pointer in her first basketball game

Best memory in Germany: When she won the state championship tournament and she shot three goals for her team in the final game to help win

I met this girl way back when we played cherub softball together. We were about 7 yrs. old. We both played for the Comets, and also she played a year younger than me in travel softball for the Rockets!   It has been great to play basketball with her as a freshman, she is an asset to our team. She works hard and is always aggressive. She will fight as a post to get the ball down low and getting up to get the rebounds. She has played basketball since she was 7 and she plays because she loves the sport and the people she plays with. Something you may find interesting about her is she has played football since she was five years old. She has always played different sports starting at the age of 4 years old. The reason why she played football was because she would watch her brothers and she thought it looked fun to hurt other people and also that all the pads and the gear they have to wear looked cool. I love have Justine as my little.