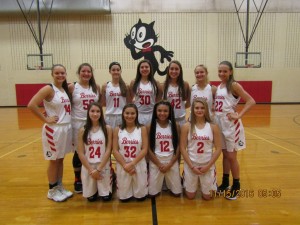 Yilian is an energetic and fun sized girl with a bit of an attitude. She’s very fun to be around and she’s always cracking playful jokes. She’s very encouraging, sweet, and inspiring when it comes to sports and her teammates. She’s often helping me calm down or keep my head up during games and practices. She takes sports very seriously and loves to play them. As she said, her hobbies are “sports, sports, and sports.” She’s always playing sports no matter the time of year. She’s one of those people who aren’t afraid to get down on the ground or get hurt. One time during one of her soccer games she actually ended up getting stuck in a middle split and someone had to help her out of it.

I actually met Yilian in sports. We played cherub softball together when we were younger. And then, later we both played for the Rockets travel softball team. Then in middle school, we played against each other in basketball when I played up with the older girls a few times. I always remember how serious and competitive Yilian was when it came to sports, just like now in basketball. I was very happy to see that she was still playing basketball and that’d we’d be on a team together. I really enjoy being her teammate and sometimes rival.

Some of Yilian’s favorite things: