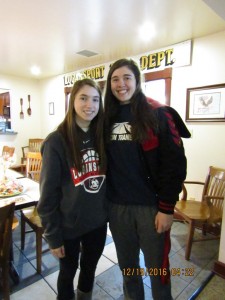 For my “Beyond the Baseline,” I am writing about my “Big,” Maddie Dalton. The first time I remember meeting Maddie was on my sister’s softball team. Maddie would have been 9, and I was 5. Then, I watched her play on a Logansport basketball travel team with my sister at Blue Chip. When I was finally old enough to go to D-One Camp, I saw her there, and continued to get to know her. I played on the middle school team, and she played on the High School Team. Off of the court, the middle school and high school team had some bonding. We shared some fun times in the dorm rooms, such as playing hide and seek in the pitch-black room, and having a big slip and slide in the showers, led by Sam Kaine.

Throughout the many years that I have been around Maddie, and gotten to know her, I have seen that she has grown phenomenally as a player, and also as a person. She is very serious when it comes to basketball, but also great at having/creating fun times. Which, are great aspects to have as an athlete. Maddie is always trying to work on her game, such as staying late to shoot, getting on travel/AAU teams, and going to a variety of camps. She is very dedicated to the game of basketball and that’s what it takes to be a good player!

I respect Maddie and look up to her as a player, and as a person. I am very proud of all she has accomplished, for she is very deserving. I am so glad that I was paired to be Maddie’s “Little.” I am excited for all that she has to come in her basketball career, and I wish the best for her in her next step in life at MacMurray College.

Favorite thing to do in her free time: Spend time with friends and family and being outdoors

Favorite Quote: Everything will be okay in the end, if things aren’t okay, then it’s not the end.

What she wants to be when she graduates: physical therapist assistant